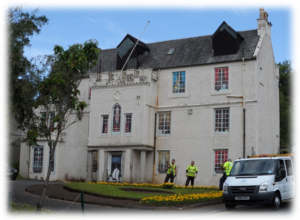 The history of our church starts in 1852, when local Episcopalians started meeting in a room in Kirktonhall house in West Kilbride which was owned by Dr Francis Caldwell Ritchie. In 1868 a private chapel was built but by 1872 numbers had grown and the catchment area had changed so that services started to be held in Ardrossan Town Hall – we have the record book of those services. Kirktonhall was later let and the chapel continued to be used once a month, in summer only from 1892, until 1897.

Demand grew for a church, and the vestrymen, including Dr Ritchie, and seat holders started to raise funds for the building.
Land was given by the 14th Earl of Eglinton and Winton, also a vestryman, and a building was designed by David Thomson in the Early English Gothic style. 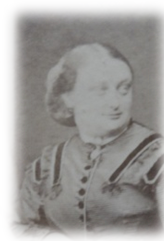 The foundation stone was laid by Sophia the Countess of Eglinton on St Andrew’s day 1874 – it is hollow and contains a time capsule of documents of the day. The first service was held on Advent Sunday 1875 when the Bishop the Right Revd William Scott Wilson gifted the two carved wooden Alms Plates.
The church was formally consecrated in 1883 when all debts had been paid off and the wall around the grounds completed.
In 1896 the Chancel was extended and the first pipe organ was installed.
The hall was added in 1905. 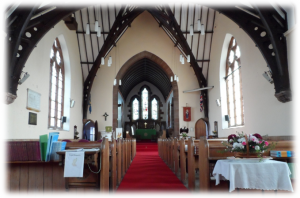 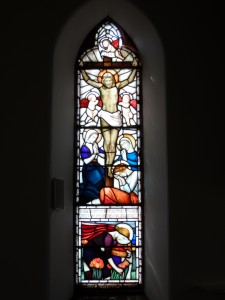 The first stained glass window was installed in 1894 by Miss Annie Mack to the memory of her aunt Miss Frances Cleugh. It was made by J&W Guthrie of Glasgow and designed by John Harrington Mann, one of “the Glasgow Boys”, during his association with them. This window is referred to in Michael Donnelly’s book of Glasgow stained glass: “In the ecclesiastical field his finest surviving work in Scotland is almost certainly the Ascension window for St Andrew’s parish Church Ardrossan ”. 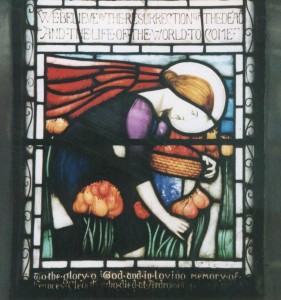 The lower panel of this window, the Angel Picking Tulips, is the face of our restoration project. Postcards are available for sale.

In 1903, William, the 2nd son of the the 15th Earl of Eglinton and Winton was killed while tent-pegging in Stellenbosch in South Africa, where he had served in the Royal Scots Greys in the South African War. His friends, “cricketers and others associated with him in the game at Eglinton” gave in his memory the splendid East window made by Clayton and Bell of London. 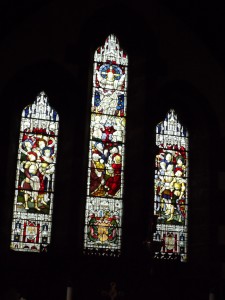 The central light depicts the Ascension of Christ with four of the apostles above the Coat of Arms of the Earl of Eglinton and Winton. The left light has the Old Testament soldiers Jephthah, Caleb, Gideon, David and Joshua above the badge of the Royal Scots Greys. The right light has the modern soldier saints George, Alban, Martin, Maurice and Gereon above the badge of the 4th Argyle & Sutherland Highlanders. 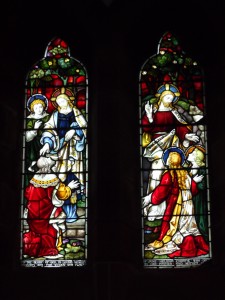 The Chancel south window by Clayton & Bell depicts Christ healing the blind man at Bethsaida and at the grave of Lazarus with Martha and Mary. It was the gift of Mr & Mrs William Christie, Timber Merchant Saltcoats, to the memory of their daughter Jane Helena who died on 12th January 1912, aged 32. 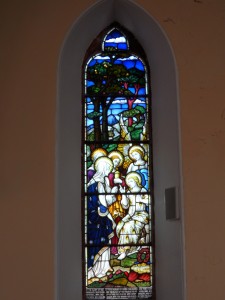 The third Clayton and Bell stained glass window depicts the Holy Sepulchre on the first Easter Morning. It is to the memory of James Cook who was a Vestryman and Treasurer for 33 years until his death in 1912, the gift of his children Thomas Kinnear Cook, also a vestryman, and his sister. 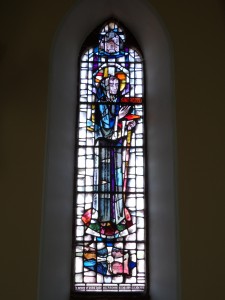 The beautiful modern (1960) window designed by LC Evetts of Newcastle, depicting St Cuthbert is dedicated to the memory of Wilfred Taylor MSc PhD by his daughter Miss Taylor. Note the map of Lindisfarne beneath his feet.

The font of Caen stone, finely carved with flowers, leaves and the sacred monogram. It was designed by the architect of the Church, Mr D. Thomson, and carved by Mr Grassby, architectural carver, Glasgow.
The font was gifted to the Church by Mr. McDonald, Braehead House Saltcoats. 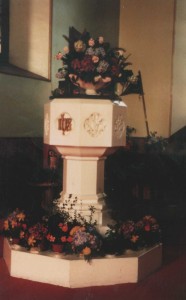 Reredos (wooden frame behind the altar)